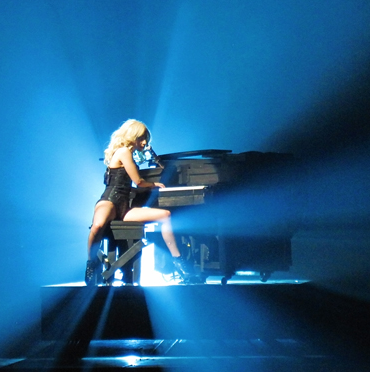 By Martin Lindstrom: Marketing consultant and author of Brandwashed – January 31, 2011

There is much the corporate world can learn from this 25-year-old diva, whose talent for building a brand might even surpass her formidable performing chops.

On July 12, 2011, Lady Gaga’s private jet touched down on Australian soil. She was in town to promote her new album. The only formal gig planned for her was a mini-concert at the Sydney Town Hall. The venue was renamed Monster Hall in honor of her fans, who she regularly refers to as “Little Monsters.” Within hours of her arrival, she put out her first tweet: ‘Thinking of going out in Sydney tonight. How I wish we had a show. NEVERMIND, don’t listen to me. Maybe I’ll just go for a walk in the pARQ.’ So, had Lady Gaga travelled 20 hours for just the one concert?

As the hours ticked by, her many Sydney fans pondered the deeper meaning of her cryptic tweet. By late afternoon, they’d cracked it. Nevermind and Arq are the names of two popular Sydney nightspots. The fans began gathering at these venues from early evening. And then, just past the stroke of midnight, she entered stage right and began singing “Born This Way.” The crowd was ecstatic. Once again the fans had found their Lady Gaga–or was Lady Gaga finding her Sydney audience?

Lady Gaga has a thoroughly sophisticated understanding of direct consumer communication. She came from seemingly nowhere in 2008. (Well, okay, from the nowhere of New York City.) In four short years, she’s become a global phenomenon. Not many others can claim 47 million Facebook fans and more than 18 million Twitter followers. Her vast reach should inspire even the most skeptical of marketers out there.

There is much the corporate world can learn from this 25-year-old diva whose talent for building a brand might even surpass her formidable performing chops. Here are three things businesses should borrow from the woman christened Stefani Joanne Angelina Germanotta:

Have you ever wondered where the idea for Lady Gaga’s meat dress came from? The dress, made out of fresh beef, surprised people across the world. It later went on to be preserved by taxidermists, and is now on display at the Women Who Rock exhibit at the Rock and Roll Hall of Fame in Cleveland. Another question to ponder is how Gaga’s scant 1,234 tweets generated millions and millions of fans? The tweets did not in fact come from Lady Gaga herself, but from Haus of Gaga, her behind-the-scenes creative team. This is not a clever exercise in renaming. The Haus of Gaga is made up of individuals who inspire her, pick up on trends, travel with her, and help create her outfits and shows. What they all have in common is that they each have direct access to the performer. The distance from idea to action is merely one conversation away.

Lady Gaga has been quoted as saying that taking away her creative team would be her downfall. It is interesting to note that the downfall of many brands has been exactly that. Steve Jobs made good design synonymous with every Apple product.  It was one of his priorities. As such, it is a well-known fact that Jonathan Ive, the head of design at Apple, reported directly to Steve Jobs. Every creative idea went straight to the top. Sadly, few companies realize how important creativity is for the survival of their brand.

2. Create a direct pipeline to your customer’s soul

Branding powerhouse Lady Gaga’s innovative strategies touch every part of her business–from marketing to social media to pricing her products:

Lady Gaga’s ability to get so very close to her audience and understand their needs, as well as cater to their hopes and musical tastes, is far from a coincidence. One of the secrets of her success can be found in a nondescript van that follows the concert tour, going wherever her team goes.

Most top performers produce their music at recording sessions in discretely luxurious studios. Lady Gaga does things differently. She takes along a mobile recording studio wherever she goes. A recording team, on call 24 hours a day, staffs this mobile studio. As a result, most of the songs she produces are recorded within hours of leaving the stage. She does this to capture the zeitgeist of the moment, tapping into the very DNA of her audience. She steps off the stage fresh with the knowledge of what her audience most passionately responded to. Then, with the applause still ringing in her ears, she steps into the mobile studio and responds to their feedback.

Which should resonate with today’s corporate world. I cannot count the number of times I’ve advised companies to move their research and development centers closer to their customers. Take, for example, a major coffee manufacturer I’ve worked with for years. They were puzzled as to why their newest coffee brand was performing poorly. When I visited their testing facility to sample the product, I was met by a team dressed in white, in a room painted white, and was served the coffee in a white mug. They were anxiously waiting for my opinion.

Sipping on that coffee in such an austere environment was a long way away from far the convivial atmosphere of drinking coffee at home. “So, what do you think?” they asked. My answer was considered as I explained that, despite the product testing well in the lab, it was necessary to take it into the home of the consumer. In that way, I’m sure they would see that the experience would be completely different. This was the broken link. So, we moved the innovation and testing process out of the laboratory and into private homes. They’re now testing coffee in consumers’ kitchens, living rooms, and front porches. Their accuracy of predicting a new coffee product’s success has increased by 60%.

In contrast to almost every other accomplished performer out there, a major ingredient in Lady Gaga’s success has been her ability to show an authentic vulnerability. She often shares stories about her own life with her fans, or ‘Little Monsters’, as she calls them, and never shies away from revealing her insecurities and listing her many mistakes. The Little Monsters love it. Not only does she manage to mirror her fans’ personal problems, but she also manages to unite them in a tight-knit tribe.

Many years ago, PepsiCo established an innovation lab online. It asked Pepsi fans to sign up, develop new flavors and concepts, and share these with PepsiCo. In order to understand the idea, I was quick to sign up, and share my ideas. I got an instant response: ‘Thank you for your ideas. We will get back to you.’ Six years later, I’m still waiting.

Some companies do, in fact, understand this. They engage their fans in innovation, treat them as stars of the show and, most importantly, get back to them frequently. Take LEGO, the Danish construction toy loved by kids for decades. Now, those kids can build the creature or vehicle or weapon of their dreams, photograph it, and upload it on the LEGO website, where it will be voted and commented on by other young aficionados.

The consumers love it. They feel so much a part of a brand that they are called upon to advise as well as share in the weaknesses and vulnerabilities. It makes everything more human. And that is perhaps the essence behind Lady Gaga’s popularity. She is human. This is a strength that I’d venture to say every great brand once had, but has lost sight of over time. If yours is a company that’s become disconnected from your humanity, perhaps it’s time to channel your inner-Gaga.