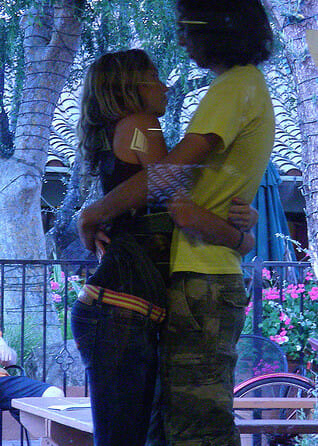 Fast Company: Thou Shalt Covet What Thy Neighbor Covets

By Martin Lindstrom: Marketing consultant and author of Brandwashed – January 23, 2011

When it comes to the things we buy, what other people think matters. A lot. Here’s how the desires of strangers–inflamed by branders and marketers–mysteriously become our desires, too.

Many of us spend our days–or at least part of them–quietly cursing our fellow human beings. The guy in the Hummer who cuts us off at the intersection. The old woman in the supermarket line counting out pennies one by one. The tourist consulting a map right in front of the subway entrance. They may be annoying, but when all is said and done we actually rely on these people, and others like them, to help dictate our purchasing choices–with more than a little help from companies and marketers, of course.

When it comes to the things we buy, what other people think matters. A lot. Even when those people are complete strangers. One survey, by Opinion Research, shows that “61% of respondents said they had checked online reviews, blogs and other online customer feedback before buying a new product or service,” and a similar 2008 study commissioned by PowerReviews showed that “nearly half of U.S. consumers who shopped online four or more times per year and spent at least $500 said they needed four to seven customer reviews before making a purchase decision.” So persuasive are the opinions of others that while many of us are well aware that roughly 25% of these reviews are fakes written by friends, company staffers, marketers, and so forth, we purposely overlook this. We’d rather not think about that. And, frankly, we don’t seem to care. As the Times of London points out, we are born to believe, in part, because a collective belief helps us to bond with others. In short, we want to trust in these messages, even when we may also be deeply skeptical.

To see just how powerfully complete strangers’ preferences and purchases can sway our decisions, consider the phenomenon of best-seller lists. Best-seller lists work so well in persuading us that they can be found everywhere from, famously, The New York Times‘ lists of best-selling books to Sephora’s list of best-selling cosmetics to Entertainment Weekly’s Ten Most Popular TV shows to Variety’s list of the ten highest-grossing movies of the week to the Apple iTunes music store’s list of best-selling or recommended singles, albums, movies, and music videos. And on and on–well past the break of dawn.

Let’s talk for a moment about iTunes. Not unlike a Barnes & Noble superstore, the iTunes start page is a chaotic place teeming with choices. Luckily for the overwhelmed shopper, however, these endless offerings are organized into tidy recommended categories like “What We’re Watching,” “What’s Hot,” “What We’re Listening To,” “New and Noteworthy,” and, of course, “Top Songs” and “Top Albums.”

An intriguing study published in the journal Science shows just how well this can work. The researchers invited 27 teenagers to visit a web site where they could sample and download songs for free. Some of the teens were told what songs previous visitors had downloaded, while other teens were not told. Those told what songs their peers had chosen tended to download those very songs.

And part two of the study was even more telling. This time, the teens were divided into eight groups and told only what had been downloaded by people from their own group. The researchers found that not only did the teens tend to choose the songs that had been previously downloaded by members of their groups, but the songs that became “hits” varied across all the groups. The implications were clear: whether or not a song became a “hit” was determined solely by whether it was perceived as already being popular.

But this still doesn’t explain precisely why our buying decisions are so unduly influenced by a brand’s supposed popularity. So the authors of the study decided to use an fMRI to see what was really going on in these impressionable teenagers’ brains when they succumbed to peer pressure. They had 12-17-year-olds rate 15-second clips of songs downloaded from MySpace. Then they revealed to some the songs’ overall popularity. The results showed that when the participants’ own ratings of the music matched up with what they had been told about the song (e.g., if they liked a popular song), there tended to be activity in the caudate nucleus, an area of the brain connected to rewards. When there was a mismatch, however (e.g., the teen liked the song but discovered it was unpopular), areas associated with anxiety lit up. The researchers concluded that “this mismatch anxiety motivates people to switch their choices in the direction of the consensus, suggesting that this is a major force behind conformity observed in music tastes in teenagers.”

Early popularity is so closely tied to a brand or product’s ultimate success that even Hollywood is leveraging the predictive power of the ticket-buying hordes. According to New Scientist, (subscription needed), one of the most widespread new techniques for predicting the box-office performance of a film is by using something called “artificial markets.” On The Hollywood Stock Exchange, for example, movie fans can buy and sell virtual shares in celebrities and in forthcoming or recently released films. This virtual market, which operates with a virtual currency called Hollywood Dollars, uses these predictions to create a stock rating reflecting the aggregate view of each film’s popularity or likely popularity (obviously, people only buy virtual shares in things they expect to be hits) becoming the gold standard in the industry for predicting likely box office receipts, political campaigns and share prices.

Of course, we generally aren’t consciously aware that perceived popularity is driving our preferences. So for my new book Brandwashed, I decided to team up with Murray Hill Center, one of the top focus group companies in the country, in order to find out what we think attracts us to products. “Why do you love Louis Vuitton so much?” we asked 30 women. In answering, each of them began talking about the quality of the zipper, the leather, and finally, the brand’s timelessness. But had we heard the whole truth? To be sure we decided to scan the brains of 16 of them using fMRI to uncover another layer of their answers.

In each case, when the women were shown pictures of Louis Vuitton products, the Brodmann area 10, the region of the brain that’s activated when respondents are observing something they perceive as “cool,” lit up. The women had rationalized their purchases by telling themselves that they liked the brand for its good quality, but their brains knew that they really chose it for its “coolness,” perhaps explaining why we’re all so addicted to those top 10 lists–because deep deep inside we want to be on the top of the cool list.