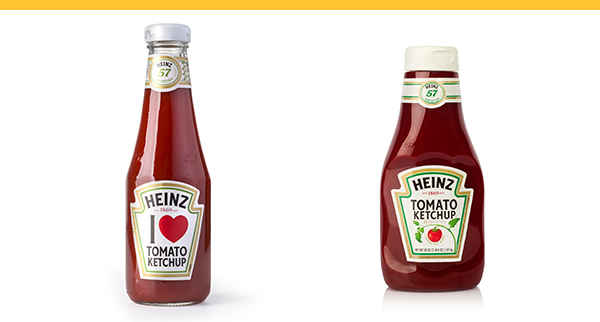 Here’s for Heinz: Why The Glass Bottle Still Rules The Brand

The arrival of Memorial Day this weekend in the US is also the unofficial start of their barbecue season. This means Heinz Ketchup will once again play a crucial role in millions of American meals. But, will Americans choose glass or plastic bottles? Glass bottles are heavier, more expensive, more breakable, and the ketchup only pours with great difficulty. Yet, in the survey we conducted before the release of my book Brand Sense, 80% of the respondents said they preferred glass to plastic! When we asked why, no two people gave the same answer. The truth was, most people couldn’t pinpoint the reason that they preferred ketchup from a glass bottle. They just knew that they did.

Of course, Heinz has spent millions of dollars convincing us to use the glass over the past decades. Take, for instance, one of Heinz’s most famous ads, which read, “Heinz ketchup exits the iconic glass bottle at .028 miles an hour.” At first, if you’re anything like me, you might ask, “So? What does that have to do with anything, particularly Ketchup.” Heinz isn’t directly claiming that their ketchup is the highest quality, talking about taste, or telling us how the product was made. So what exactly are they trying to accomplish?

That print ad wasn’t just a one-time mistake either. Let us also not forget another memorable Heinz advert from back in the 1970s. This one used Carly Simon’s song “Anticipation” that focused on a consumer that waited and waited for the damn ketchup to come out of the bottle. Why would Heinz promote something that should be a point of frustration for its rational clientele?

The answer, of course, is that Heinz knows we aren’t always rational. These old ads aren’t just curiosities, they are strokes of genius. Our preference for the glass bottle is actually built into our subconscious. We have an ancient human instinct that equates slow with high quality, and that also equates fast with poor or half-hearted handiwork. It’s why we value aged wines and liquors and why, if given the option, we’d almost always choose a meal we were told took an hour of prep over one that took just a few minutes.

When we say that we prefer glass bottles we may not know why. But our subconscious does.* Our brains connect the dots and in less than a second decide that the long wait for Heinz ketchup is worth it because ultimately they’re convinced (or maybe tricked!) they’re getting the best possible product.

There’s more to the story, but for now I hope this little branding insight sparks some fascinating conversation around the picnic table! And be sure to let me know which you’ll be using: glass or plastic?

* Coke, too, has recently brought back it’s glass bottle for sale as a premium product and one of our studies shows that the product tastes around 41% better in glass than in plastic – this is of course all about perception.

This originally appeared on LinkedIn. Join the conversation here.