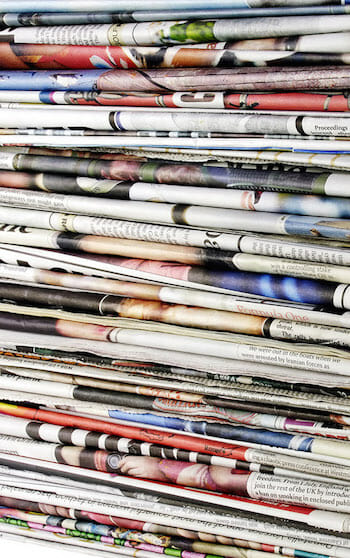 Fast Company: How the News Business Can Survive Facebook

The social network’s plans to control even more of the media industry squeezed a collective gasp out of publishers. Was that a last breath?

Facebook recently wrapped up a “listening tour,” hoping to lure publishers across the United States to deliver their content pages and news feeds to Facebook. The idea was that these pages would take on their own life within the mobile portion of the social media space. Since Facebook’s 1.4 billion users give it the world’s biggest platform, it goes without saying that this move would define the very future of news delivery.

Many publishers were aghast. People in the world of branding felt something else: déjà vu. Can you hear the whisper: Private labels? Sell us your merchandise as cheaply as you can. In return, we’ll label it with our brand name and sell it in our stores, and perhaps—only perhaps—we’ll mention you in a rather offhand manner. Supermarkets love the private-label concept, since it transfers consumer loyalty into their courtyard; manufacturers hate it, since it leaves them stripped of all consumer loyalty and in possession of only one remaining strategy for leverage: price.

What does this have to do with news? Well, think about the last time you bought a newspaper. Chances are, you hardly remember. That’s how long ago it was.

For me, it’s become an obsession, avoiding typing in my credit card number when asked to pay to read an article. Just like you, I love the free New York Times, but when the system tells me my quota is up, I don’t reach for my credit card. Instead, I open another browser to get access to another round of articles. That’s just how I’ve been trained—and I’ll bet you have, too.

Take a look at the music industry. In the U.S., according to the Wall Street Journal, recorded music sales are nearly 50% below their peak from 2000. According to RIS of America, U.S. revenue from downloads of singles and albums fell 11% and 14%, respectively, in the first half of 2014; and music sales at Apple’s iTunes Store fell 13% since the start of the year.

Streaming looks like a winner, leaping 28% in the first six months of this year. If you were wondering why Apple purchased Beats Music, with its $10-a-month subscription streaming service, that’s the answer. But the writing is on the wall. A price war in the streaming music world: It’s the dynamics of private labels all over again.

In the early 1980s, far off in the Alps, the world-famous Swiss watch manufacturing industry faced a crisis similar to that confronting the music and news industries today. Though the Swiss had introduced the first commercial quartz wristwatch, they had been slow to see its potential. It was the Japanese who ran with the idea. Within one year, 66% of the analog watch industry had died.

What was the Swiss manufacturers’ response? They panicked!

But once their panic subsided, they did something surprising. Among the things the Swiss are very good at is holding alignment meetings. Remember the Phoebus light bulb cartel, organized by the Swiss in the 1920s? It fixed the life expectancy of light bulbs at 1,000 hours, a standard of obsolescence that still endures.

What would have happened if the Swiss had been unwilling or unable to align themselves? An entire industry would have vanished overnight.

So is the news industry’s solution really that simple: alignment?

Let’s rerun the Swiss approach, using the news industry as our guinea pig. Imagine an alignment of the entire news industry. Not an easy task, but not impossible, either, given that the entire industry is on the brink of collapse. Based on some back-of-the-envelope calculations, I reckon that if the five dominating media companies joined forces, 80% of original-content news would be owned by that collective.

The five common-front news houses would need to make just one move: no more streaming of free news. The result? No more free news for Google News. No more Facebook news feed. If you want the news, you’ll have to buy it.

Of course, there would be a deafening uproar, followed by creative attempts to secure free news in other ways. But before long, consumers would remember that news—like other commodities—costs money to produce. They’ve realized it in Scandinavia, where news houses aligned and the “free news” button disappeared.

Overnight, the ball game would change. This wouldn’t solve every problem; monetizing the online world is still an ongoing challenge. But for the first time in a very long time, the news houses would find themselves in the driver’s seat.

The clock, of course, is ticking. AOL and Yahoo have already geared up their news machines, creating the illusion of real media by hiring the likes of Katie Couric and infusing a dose of Huffington Post to their editorial departments. But these online media outlets still have a long way to go before they truly own news production.

The Swiss showed that it’s possible to turn back time. Now let’s see if the media industry can put the news back in Pandora’s box.