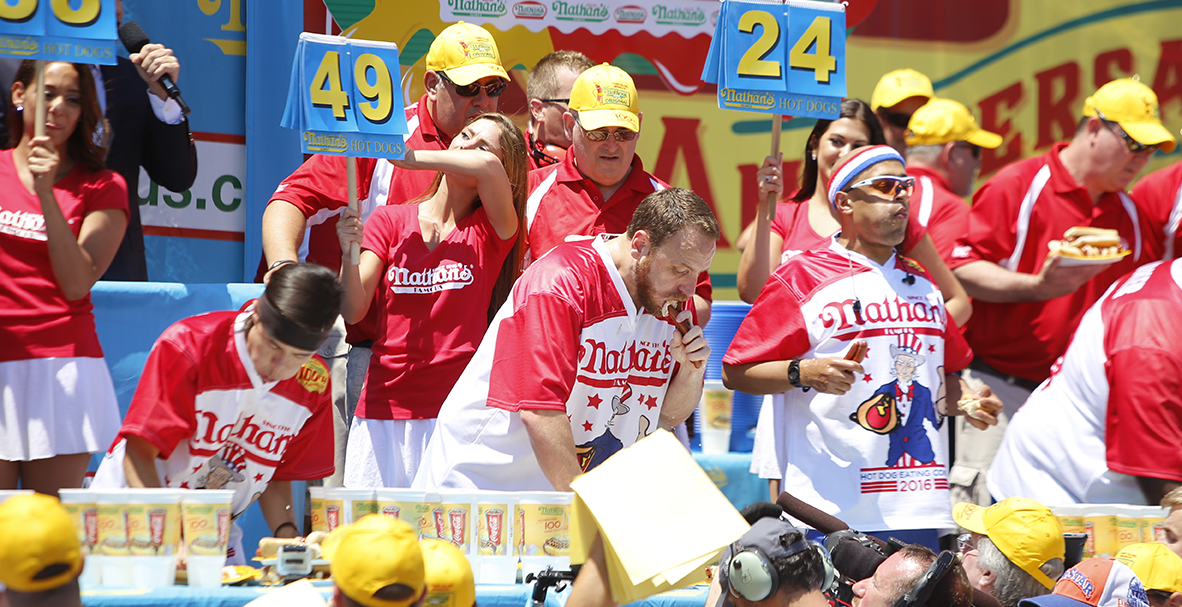 How to Eat Your Way to Success

Today in the USA it’s not just July 4th, it’s the Fourth of July.

Now tell me, as you read those words, what was the first thing that popped into your head? Was it fireworks? The Declaration of Independence? The old Red, White, and Blue?

While it’s reasonable any of these could be the first thing you think of, two brothers fought hard, and succeeded, in embedding something else in the American consciousness – Nathan’s Hot Dog Eating Contest. You may look at this famous frankfurter-gorge-off and see it as a celebration of gluttony, but take a closer look, and I think you’ll discover it’s the result of some incredible marketing.

The current hot dog eating contest only came into its own in 1997, when PR mavens Richard and George Shea, brothers who had worked for Nathan’s, took the formerly small-time sideshow at Coney Island to the big time.

The Sheas created the International Federation of Competitive Eating (now known as Major League Eating), to formalize the sport, and went to work expanding the competitive eating brand and wooing sponsors.* It was genius! The brothers knew a standalone event, in a niche market, would never capture nationwide (or even worldwide) attention like a whole sports league could because of the lack of brand storytelling – we need time to familiarize ourselves with the characters, choose who to root for, and understand their role. Multiple events throughout the year establish favorites and underdogs, sometimes even heroes and villains.

So the brothers elevated awareness of the event by shifting the conversation from a one-time spectacle to the crown jewel of a year-long set of serious and competitive events. In the process they allowed rivalries to develop and drive media coverage. While the league may reduce the uniqueness of a yearly hot dog eating contest, it also counterintuitively raised interest, built its legitimacy and took a parochial event to worldwide fame.

And for twenty years, the Shea brothers have succeeded. Competitive eating has grown into an international phenomenon. The Major League Eating brand has grown exponentially since the late 90s, with new stars regularly cropping up to replace the old. In 2001, Takeru Kobayashi shattered the previous record by doubling it, eating fifty hot dogs in twelve minutes. Kobayashi became an overnight media sensation. In 2007, Joey Chestnut, a virtual unknown, overtook him by a three-frank margin to become the contest’s new reigning champ, and the sport’s new star. Both became iconic names in their own right, a testament to the cultural capital competitive eating has come to possess.

And these stars are inevitably linked with Nathan’s. The California-born Joey Chestnut, who is the odds-on favorite to reign supreme at Coney Island this year, is mentioned alongside about a quarter of Nathan’s brand mentions every year. Chestnut has also been profiled by GQ, and you can be sure that article mentioned Nathan’s by name, probably more than once.

In fact, every year since 2004, has gotten national attention with airtime on ESPN. The event is, unsurprisingly, not only the brand’s most important annual event on television and on-location but also on social media, where we can truly see evidence of the event’s impact.

According to a brand intelligence report compiled by Adweek, around three-quarters of the brand’s annual online surfacing takes place on-or- around July 4th. The Fourth of July also sees a huge social boost for chatter around hot dogs, Nathan’s, and condiments like mustard and ketchup. All of these a boon to mindshare for Nathan’s. In that, you again see the genius of the Shea brothers’ plan. They created something that would have storylines and stars, such that media and audiences from seemingly unrelated markets would be curious to learn more.

*This, of course, is the true story, as far as we can tell. There are dozens of PR myths surrounding the history of competitive eating. Nathan’s Famous itself claims that the first hot dog contest was held in 1916 — an unproven myth, as the first Nathan’s contest anyone can remember took place on July 4, 1972, but it’s a fun myth nonetheless.