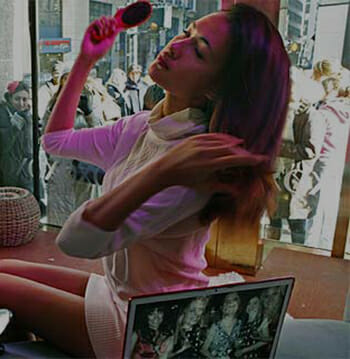 A clothing and accessories retailer is drawing traffic — and controversy — with two women lounging around in skimpy clothes in a window on Fifth Avenue.
By Tina Susman
December 4, 2009
Reporting from New York

It’s what all young women do in their spare time: lounge about in frilly underwear, fiddle with their rhinestone bellybutton rings and prance on the sofa, oblivious to passers-by peeping through uncovered windows.

Well, not quite, but the provocatively clad women going about their business on Fifth Avenue aren’t typical. They are an advertisement for the clothing and accessories retailer XOXO, whose live window display featuring two models — friends from Venice, Calif. — engaged in mundane activities is a megahit this shopping season.

“Are they real?” one man asked incredulously, whipping his head around toward the window Tuesday as Helene Traasavik and Niki Huey sipped coffee and dabbled on their laptops while wearing lacy lingerie, short robes (open in the front) and slippers. “I came all the way from Queens to see it,” said another man who gave his name only as Tin.

Whether the display will translate to a permanent boon for XOXO remains to be seen, but one thing is certain: It’s drawing more attention than tiny reindeer and Santa’s sleigh ever would.

Since “the show,” as locals call it, opened Nov. 27, traffic to XOXO.com has increased 35%, said Erin Haggerty of the Kellwood Co. — which designs, manufactures and markets goods that include XOXO’s flirty, feminine fashions.

Some of the increase is due to Black Friday and Cyber Monday surges, Haggerty said. But some no doubt can be attributed to the buzz the advertisement has created in a city famous for its residents’ ability to barrel down the sidewalks while ignoring the street theater around them.

At the corner of 38th Street and Fifth Avenue, nearly everyone stops to stare. Amused strangers debate everything from the appropriateness to the point of it all.

“We have to approach things in nontraditional ways,” said Carol Powley, Kellwood’s senior marketing director. “This is a look into the first apartment, if you will, of an XOXO girl.”

There is a powder-blue sofa, a white shag rug, racks of clothes, shoes on the floor and pictures on the wall. There also is a full-length mirror in front of which Traasavik and Huey preen as they wriggle in and out of different outfits before fascinated onlookers. Those moments, however, are rare. The models spend most of their six hours in the window every day in lingerie, sipping coffee, chatting and checking e-mails on their laptops. Yes, they have WiFi in there. All that’s missing to make it perfectly homey, it seems, is a cat. And curtains.

With more people than ever shopping online, the spectacle is a surefire way to grab consumers who otherwise might not notice store windows. And the fact that prime Manhattan space was available is a reflection of New York’s struggling economy. The space on the buzzing corner used to be occupied by a CompUSA store, which closed.

This week, neither cold rain nor frigid winds stopped people from standing transfixed in front of the floor-to-ceiling windows once Traasavik and Huey sauntered into view at noon. Most of the lingering men would not give their full names, and they scattered like snowflakes in the wind when a TV crew turned its camera in their direction. But all of them had opinions.

“I wouldn’t otherwise look at their website, so this was a way of getting my attention,” said an electrician named Chris, adding that his wife might like the blue booties on one model’s feet. “I wouldn’t have noticed them on a mannequin, but on her legs I did. Maybe now I’ll buy them.”

Patrick Walsh Jr., who runs an animation studio in the neighborhood, stopped by with his colleagues Gary Stanton and Brendan Murphy to see what the fuss was about. “I passed by this like three times yesterday and didn’t know what the product was,” Murphy said. “It seems like they’re selling underwear,” Walsh said. “Or phone sex.”

All agreed that the display was mild compared with what one might see in Amsterdam’s red-light district — and many female passers-by shared that view. “It’s cute. It sure got my attention, but it would help if they put on more clothes so we knew what the items looked like,” Dee Sealey said.

Nobody has formally complained, according to police spokesman Martin Speechley. The biggest problem seems to be the ruckus that ensues each time the models stand up, drop their robes and move toward the clothing rack — a sign that it’s time to shimmy into some clothes and then take them off again. Men press close to the windows. They wave. They hold up signs. One lifted his shirt and pressed his bare chest against the glass.

It’s hopeless, though. Huey and Traasavik, both professional models, have no trouble ignoring what’s going on outside. “We’re kind of used to being stared at,” Huey said good-naturedly as she and Traasavik sat on the sofa after slipping on stilettos and leg-baring outfits.

“It’s so laid-back, it’s almost like not working,” Traasavik said. The hardest part might be lounging about while looking perfect. “Because we get dolled up all the time for work, we don’t like to do that in our down time,” she added.

The display will run through Sunday, and advertising guru Martin Lindstrom said that no matter what the short-term sales impact is, the buzz surrounding the campaign guaranteed long-term benefits for XOXO.

“Sex does not sell, but what sells is the controversy around it, and that’s what is happening here,” Lindstrom said. “XOXO has generated brand awareness.” There’s just one problem, he said: How to follow this up with an equally buzz-worthy campaign. Because “people will expect to be even more shocked next time.”