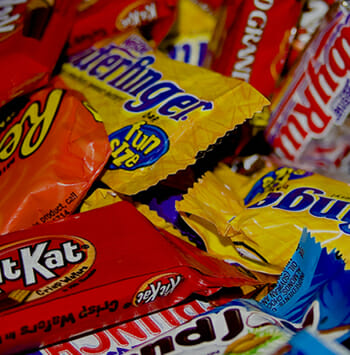 Mini-branding Comes to the Net

Remember the first time you encountered miniature M&M bags at the supermarket? You know, the baby bags that held only 30? Bet you liked them.

How about when the mini Toblerone, Snickers and Bounty bars appeared? You might have been able to justify purchasing these small sizes by telling yourself they were convenient. In fact, you probably just thought these miniature versions of the full-size products were cute.

Most of us harbor a fascination for miniature things. And manufacturers have noticed this predilection. Mini-products have proven to be huge sales successes, despite the fact that these smaller products sell at proportionately higher prices than their larger predecessors.

The tactic is called mini-branding, and it’s not easy to analyze the formula that makes it work.

It’s emotionally driven, and often makes no logical sense. It’s not practical to open a bag of M&M’s for every 30 you consume. I suppose if you were eating M&M’s only for the taste you wouldn’t be wrapped up in the idea of small packets. But sales statistics show that this isn’t the case. People love smallness.

The reasons for the effectiveness of mini-branding are open to theorizing. But in the end, mini-branding adds a human touch to the product and to the brand. Cuteness immediately creates a relationship between the user and the brand. If that happens in the absence of purely practical reasons, mini-branding has succeeded.

So what has this to do with the Internet? Well, mini-branding might just prove to be the next-wave branding trend on the Internet. Why? Because this type of branding draws upon something ineffably appealing to humans: Small and cute charms us.

Our sentimental response to cuteness is in major contrast to the working relationship we have with the boring desktop window. After almost 15 years, the only icon to have survived desktop evolution is the wastepaper basket icon that Macintosh introduced. All the other icons, though designed in a high-tech and appealing style, died. But the wastepaper basket, in mini-format, survived. We could all relate to the image, understand it, and use it without instructions.

A year ago, wotch.com launched its mini-browser, a browser that gives users access to all the programs on their computer via a cute little window furnished with mini-icons. Later, wotch.com launched its mini greeting cards and mini books, all cleverly designed in small sizes. And users love them. More than 650,000 users now download the mini-applications, many of which are, in reality, simply scaled-down versions of what we already know.

In Japan, mini-branding is also popular. DoCoMo is a company that offers users cute mini-icons they can download and send to their friends’ computers and cell phones. These have become so popular that the company now ships out 100,000 mini-symbols every day.

In a time where technology is providing an increasingly causal and predictable working and recreational environment, the quirks of human nature continue to provide an ironic counterpoint to technology’s insistent logic. Irrationalities, like a fondness for the miniature, suddenly have an important role to play on the screen and in everyday transactions.

The crucial constant that underlies this paradox is that branding has nothing to do with functionality. It’s all about feelings, the feelings evoked in users by images and associations. People don’t choose Coke or Pepsi ahead of one or the other for logical reasons. They do so because they relate to one of the brands more readily than they do to the other. Mini-branding is just another way of harnessing such feelings and ensuring that users and brands are on the same communication frequency.

In a world where technology is enforcing predictability – a systemization that’s reflected in the presence of highly tested icons set up in ordered frames using standardized color schemes – the unexpected is becoming ever more popular. Humans are irrepressibly prone to being human. Despite the structures they build for themselves to enforce order, human emotions are apt to stage breakouts and introduce surprises to the system.

Mini-branding is the outcome of strategies that wisely understand the importance of the human touch in an increasingly inhuman environment.