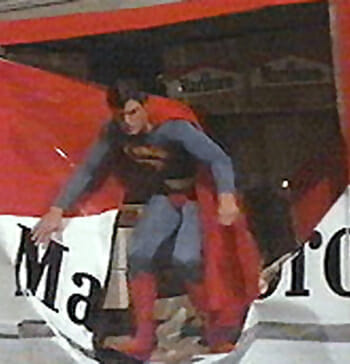 If you’re one of many moviegoers to have seen “Pearl Harbor” recently, you’ll probably recall a scene that includes a Coke bottle.

However, this scene doesn’t place the iconographic bottle in a positive promotional context. It locates it in the historical context: the staff at the hospital at Pearl Harbor using Coke bottles as blood containers, pumping blood directly from patients into the well-known receptacle. It is a scene that certainly changed my perception of the Coke bottle.

My first impression was, “Oh, yeah. Just another product placement.” But this assumption changed when I noticed, later in the movie, the Pepsi identity also making an appearance. Pepsi was represented in a less surprising and more conventional context. Juxtaposing the contexts in which each appeared left me wondering, “Who paid for what?” Was I witnessing an intriguing piece of negative product placement orchestrated by Pepsi? Or was this simply Coke’s alternative means of attracting attention? I guess the color of blood could be interpreted as approximating Coke’s corporate color!

Over the past months, I’ve been noticing the emergence of negative product placement — on TV, in movies, and on the Web. The trend forms a sad parallel with U.S. electioneering practices in which candidates use as much dirt as they can find on their adversaries to further their own interests. This negative approach is interesting, because in one way it does make sense: Negative branding puts the attacker in a position of advantage. But the price of this strategy is likely to be inescapability: Negative branding can become part of a never-ending story in which both brands eventually lose.

Mind you, the negative product placement trend has been part of the evolution of a number of fascinating promotional undertakings. For example, major search companies feed journalists with guidelines on judging the quality of a search engine. Often the result is that the journalist finds the guidelines useful and uses them to judge the world of search — from a controlled point of view. Is this, then, effective PR management or negative product placement?

Another example involves a major tobacco company. It supposedly purchased 100 keywords from a major search engine. These led consumers (by coincidence) to a raft of Web sites all telling one side of the smoking and health-risk story, namely the side that promotes the minimum-risk propaganda. All these sites, of course, claim to be independent of each other, to have no direct relationship with the tobacco company concerned, and to be able to call upon trusted authorities to back up their views.

Recently, certain viruses have been claimed to target certain branded software programs — a major irritation for users that can result in a decrease in user loyalty toward that software brand. The fault of the virus? The question that is never answered is, “Who was behind the virus?” A competitor? Perhaps. Or perhaps not.

Maybe the explanation for this trend toward negativity lies in desperation. In a world where the consumer’s per-week media consumption hasn’t increased by more than 3 percent in the past 10 years — while more and more media, representing more and more brands and messages, are appearing daily — brands are desperate to capture every extra minute of the consumer’s attention.

The experience of the press and mainstream media tells us that bad news sells 10 times better than good news. And so, it follows, that bad news about a competitor promises more sales for the communicator. Is the trend here to stay? Are we seeing product-oriented advertising being usurped by the negative promotional habits demonstrated so capably by U.S. political campaigns? Or will the trend evaporate from the brand-builder’s repertoire as quickly as it arrived?

As usual, time will tell. The wild card lies in the consumer’s hand. The consumers are canny, analytical, and product literate and are quite capable of seeing through the stories built by marketers. Consumers can pick truth from falsehood, and their inclination to do so will be a factor that determines the survival of the negative brand-building approach.

One thing’s for sure: The recourse to negativity adds another dimension to the marketing director’s job. Now, not only must you create campaigns for your own brand, you’re obliged to mount less-positive campaigns for all your competitors as well.