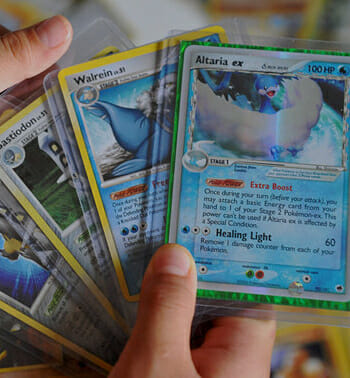 Just when most people would have sworn that offline toys were dead, Pokemon appeared on the toy scene with paper-based toy cards – and, within a few weeks, almost killed online toy sales.

Most toy products went the other way: LEGO introduced LEGO Mindstorms, Disney offered Disney Blast, Mattel went for CD-Barbies. These companies went for toys on the Net or on CD. But Nintendo did the unexpected and introduced a truly interactive concept: An offline toy.

What does this teach us? Right when we were thinking that everything has to be online to succeed, the new generation, the “Tweens,” display a preference for going offline.

Pokemon isn’t the only example of a new product being placed in the offline environment. Drugstore.com resorted to bricks-and-mortar selling when it teamed up with Rite Aid. Is this the beginning of a trend that manifests the reality that within all businesses there has to be a sensible balance between the offline and online worlds?

Research figures show that only eight percent of the American population prefer to shop via catalog services. The remaining 92 percent prefer the shopping experience – the social interaction, festive decorations, color, clatter, and carols.

It’s always fun to try something new, like online shopping, but even champagne begins to taste a little dull if it’s the only thing you drink. People need variety in their diets – and, as we know, every diet should be balanced.

Does the fact that kids love Pokemon cards indicate that they’re already over online mania? Do they now seek offline media to achieve a sense of balance in their entertainment and communication diets? Or is this simply a replay of the shift in preference we saw years ago when young television addicts – who could barely leave the couch to go to the toilet – transformed their television preferences into a devotion to… the Internet?

Sure, certain new toys enjoy remarkable popularity. But it appears that we are facing a future that reflects a recognition that a more balanced mixture of off- and online media is desirable. Everything we do doesn’t have to be on the Net, just as everything doesn’t have to be offline. Both environments have their strengths, and getting the best from them means using them the right way.

The fact that what is perhaps the most computer-addicted generation yet, the “Tweens” – who’ve grown up with computers in front of them, studied computer science at school, done their homework on the PC, and spent much of their free time in front of the screen – now go offline is an interesting signal, one we shouldn’t overlook. This might be the best hint we ever get on how our brands should look in the future and how the online and offline split should balance