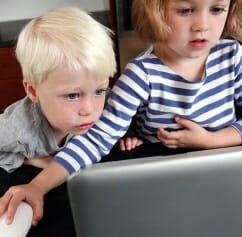 TIME Magazine: Bringing Up Baby in the Digital Age

By Martin Lindstrom: Marketing consultant and author of Brandwashed  November 4, 2011

By age 2, 92% of American children have an online footprint. What does that do to their psyches?

Last year, the Internet security firm AVG reported that 92% of American children have an online footprint before the ripe old age of 2 years old. Their digital presence often begins with their first image — a sonogram — being posted online. Each subsequent shot, from birth to birthday party, is shared on social networks. In fact, 7% are born with a pre-established email address, and a further 5% have a social network profile. On the one hand, this means that you are no longer forced to politely page through proud parents’ photo albums. But what does such visibility from such a young age do to both the kids and their parents?

In order to seek answers to this question, I decided to spend at least 48 hours in the homes of 10 different families. First on my list was Peter, a 10-year-old, who lived with his mother, father and younger sister in a small suburb on the outskirts of Charlotte, N.C. These young parents were so delighted with the prospect of their first child, that they had uploaded the image from Peter’s first sonogram on their own website.

As Peter was showing me around his bedroom, I noticed some small black lines drawn on the back of his bedroom door. They were kind of like the old tallying system — four small vertical lines, crossed by one horizontal. Peter was obviously keeping a record of something. I was curious but not quite prepared for his answer. He patiently explained that each line represented an occasion where he’d been allowed out of the house on his own over the past year. There were only seven lines, and it appeared that the most recent outing was already two months old.

As I dug deeper, I realized that Peter’s parents were not afraid of him running away. Nor were they afraid of him falling outside and hurting himself. Rather, having lost all sense of privacy and sure that every move of Peter’s could be tracked, their primary fear was abduction. And as a result of their concern about the dangers of the outside world, they’d focused on making the world inside their home as entertaining as possible. Peter had free access to his computer and every kind of game — there was a Gameboy, a Wii, an NDS as well as a library full of DVDs. This was not a world exclusive to a boy and his toys; Peter was welcome to have friends over to play as often as he wished.

Two days later I moved on, joining Michael and his family in Louisville, Ky. The story was somewhat similar but, in this case, the invasion of privacy — and the attendant dangers — had moved indoors. Michael had built a Lego castle in the corner of his bedroom, and he was happy to guide me through the design. As he pointed to the perimeter, he explained, “Here’s the first wall protecting me and my family.” He went on, talking me through the second wall, the third wall and finally the fourth. At the very center of this walled bastion was a small bedroom. “This is where I live,” he casually stated. Cameras, microphones and a few guards were positioned around the room. I was a somewhat taken aback when I noticed there was no inside handles on his door. In other words, he could only leave his room if someone opened the door from the outside. One of his direct contacts with the outside world could possibly be via the email address his parents had set up for him before he was born, or his Facebook account, which is extremely active.

Over the next month, as I visited home after home, I realized how dramatically different life had become since I was a 10-year-old. I grew up on the suburban streets of Denmark, mingling with all the other neighborhood children. It’s hard to imagine what courage it took for my parents to allow me, as an 8-year-old, to walk to school alone. What were they thinking when I turned 15 and they let me borrow their boat to go ocean sailing with my two best friends?

But in a strange twist to this tale, if my parents had been asked to share images of me that would give shape to something called my digital footprint — pictures of me in the womb or taking my first steps or smiling my first smile — I’m pretty sure they’d have rolled their eyes and thought, “Is this person mad?” Fast-forwarding to 2011, I am pretty certain that parents of today would be equally aghast if their neighbor’s child was allowed to walk to school or sail the seas alone. They would undoubtedly roll their eyes and possibly say to one another, “Are they mad?” But I’m not entirely sure which family would be right.