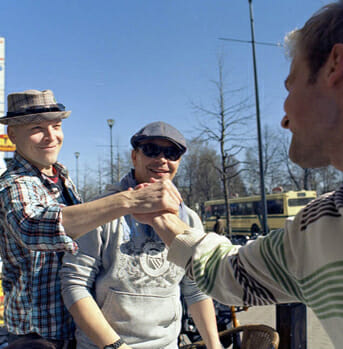 By Martin Lindstrom: Marketing consultant and author of Brandwashed – February 22, 2011

From handshakes to hardware, intimate signals constantly affect us in life. As the world becomes increasingly digital, we are losing many sensory signals that once moved us. Here’s what can companies do to reclaim these touching moments.

I’m sure you’ve had the experience of reaching out to shake someone’s hand, only to be surprised by a palm so limp that it feels more like a dead fish than a warm welcome. What was your immediate impression of the person? How, then, did you reassess them? If you thought it indicative of a weak character, you’re onto something.

Some years ago, researchers at the University of Alabama studied 112 male and female students whose handshakes were evaluated by four handshake coders. The coders had received one month of training and practice in shaking hands and evaluating handshakes before the study began. The students, who didn’t know their handshakes were being evaluated, had their hands shaken eight times (twice with all four experimenters) and they also completed four personality questionnaires.

Results of the study, led by Dr. William F. Chaplin, showed that a person’s handshake is consistent over time and is related to some aspects of his or her personality. Those with a firm handshake were more extroverted and open to experience, and less neurotic and shy than those with a less firm or limp handshake. What strikes me is that we are somehow intuitively aware of this personality evaluation filter, where something as simple as a touch significantly influences our decision-making processes.

Having worked with sensory signals throughout my career, I’ve come to appreciate how the smallest sensory details can have the greatest impact. Take, for example, the sound and feel of opening a bottle of water. You’re at least subconsciously familiar with the subtle click of a breaking seal. However, let’s say you’re in India, where the water bottles open silently. When I heard about the absence of the subtle click, I questioned the safety of the water. Apparently I wasn’t alone: I remember reading about a competitive water bottler who took advantage of this, changed the top so that it clicks, and gained a competitive advantage in the water market place. People believe the water is safer.

Signals across almost every aspect of our lives affect us. It’s interesting to note that, as we become increasingly digital, we are losing many sensory signals that once surrounded us. Others, however, often replace these. We’ve come to depend on a whole new set of tones as we key in numbers on an ATM or a cell phone.

In order to investigate just how important our senses are, I initiated a small experiment exploring people’s perception of an unknown brand, based on the type of media where they were introduced to it. I wanted to look at how different media formats convey indirect messages.  But, most importantly, I was interested in seeing if the physical presence of a media channel, such as a billboard, would affect a person’s sensory impression of the advertised brand.

We established four different sources: a billboard, a storefront, a print ad and a banner ad. The fictitious brand, Insursafe, claiming to sell insurance, was featured in almost identical fashion across all four media platforms. We then questioned 132 volunteers on which source inspired the greater impact regarding trust and sensory impressions. Then using only those volunteers who had indeed noticed the message, we discovered something quite fascinating. The more ‘physical’ the media channel was, the more ‘solid’ was the impression it formed in the respondents’ brains. The signage on the storefront was the most trusted, followed by the billboard. They outperformed, by far, the print ad and banner ad. Not only was there greater trust for the fictitious insurance company when viewed on a building or a billboard, the volunteers also expressed a stronger emotional relationship with it.

Perhaps more surprisingly, people also felt a stronger sensory relationship with the brand that they saw on the shopfront and the billboard. When asked what senses they linked with Insursafe, the storefront and billboard registered three times more sensory connections than the print or banner ad. Bear in mind that no one had ever heard of this brand before and exactly the same logo and message appeared in all four options.

We have been led to believe that, as the world transitions to all things digital, we will naturally embrace whatever is on offer. This is far from true. Our brains regard a physical presence as a more reliable and trustworthy conveyer of messages and we also log more sensory impressions to the brand. Why, you may ask, is that so important? When I was conducting fMRI experiments for my book Buyology, I learned that the more sensory impressions a brand conveys, the more likely we are to remember it. This perhaps goes some way to explaining why that handshake is so important.

What occurs when we’re consistently deprived of sensory cues? My theory is that, for example, when we sit in front of a screen and push away at order-confirmation buttons, we need to find a way to compensate for the absence of touch.

So, as thousands of retail stores close their doors each day and hundreds of conventional media channels seem increasingly paralyzed by social media’s magnetic appeal, contextual messages and data mining, it just might be that the large signage displayed on the local office building or the CBS Outdoor billboard is massaging your brain in ways that no banner ad can hope to compete with.

Of course, I never said that. My message was merely conveyed by a firm handshake, based on trust.