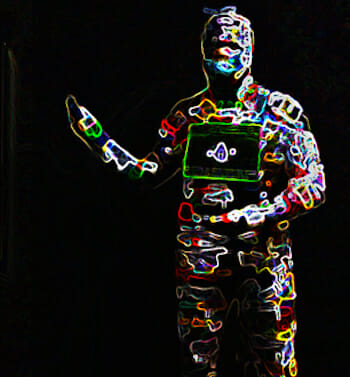 Fast Company: How I Busted Out of My Addictive Technology Loop

By Martin Lindstrom: Marketing consultant and author of Brandwashed – May 8, 2012

As with all addictions, our intense fascination with life-changing tech must be managed. I found this out the hard way–when my rental car met the parking garage wall.

Recently I was sitting around the boardroom table of a major security company in Tel Aviv, when I noticed something quite unusual. There was black duct tape covering the camera lenses of every laptop and tablet in the room. The small microphone outlets were taped over as well. I was curious, and asked the head of security why this was the case. He explained that one could not be too cautious. He went on to say that, without exception, all electronic devices could be hacked into.

The irony was not lost on me. After all, this is a firm with the finest security-minded experts in the world on their payroll, and they’re making it company policy for employees to cover cameras and microphones with duck tape! I couldn’t help but feel it was all a bit paranoid as I left their office and headed for my rental car down the street.

I got into the car, put the digital key in the lock, and… nothing. The car was totally dead. Then my cell phone rang, and it was the head of security. In a teasing voice he told me I shouldn’t be surprised to find my car would not start. They had, after all, just hacked it.

Now, I’ve heard about hacking computers, cell phones, and even networks as secure as the U.S. military, but hacking a car? Clearly, the head of security was making a point. I hung up the phone, turned the key, and immediately the car’s engine sprang to life. Point taken.

According to Dave Evans, the chief futurist at Cisco, by 2020 there will be 50 billion devices online, and these will include gadgets that don’t yet exist–for example, intelligent fridges that can detect when the milk is turning. Those paid to know about such things are predicting ridiculously low costs for access to such technology, like 1 cent to connect a device online.

In 1999, Kevin Ashton first used the phrase “Internet of things” to describe his vision of connecting the physical world to the online world. He was subsequently instrumental in inventing RFID (radio frequency identification), a system that connects the physical world to the Internet via micro sensors. These sensors already track barcodes and price tags, but will soon be everywhere else. There’s the promise that they will take over all the trivial routines that burden us on a daily basis, for example regulating heating, adjusting water temperature, and even tracking lost items. Think how much time you could save if you never lost your car keys.

More than ever, this Internet of things reflects the way technology is working to make our lives easier, safer, and more enjoyable. But is it really? In some ways, yes: Electronic devices tell us how to reverse our cars, Siri is there to help with questions big and small, and Google intuits what we are really looking for when we’re not quite sure of the spelling.

What’s not to love? I certainly did love it all, until it started going wrong, and it had nothing to do with that Israeli security firm. When I finally got my car started that day, see, I promptly reversed into the wall of the car park. My brain was in automatic mode and my own car was too old to have warning beeps. The very next day I lost the bag that had my phone in it at the airport. When I wanted to call a good friend for some moral support, I had forgotten his phone number. I was frazzled–in part because up until then I was rather unaware of how dependent I’d become on this network of stuff.

If you puff on a cigarette, we all know, you’re playing a dangerous game of dice with a potentially lifelong addiction. But what we’re confronting now is a new version of addiction, and we’re all susceptible to certain side effects.

Several studies show our ability to recall data, phone numbers, names, or just plain old facts are slowly diminishing. Dr. Betsy Sparrow, an associate professor of psychology at Columbia University, along with her collaborators, used trivia quizzes and word lists in a four-part experiment researching how sophisticated search engines have affected the way we memorize information. They discovered that the participants were far more likely to remember information if they thought that they would not be able to find it at a later stage. However, if they were confident that could look it up in the future, they remembered the key terms rather than the data. The study reported that the Internet has in fact become an external storage system for our brains. Dr. Sparrow has been quoted as saying, “Human memory is adapting to new communications technology.” And not all adaptions, it seems, are positive.

I love technology, but as is the case with everything addictive, it has to be moderated. As a result, I’ve begun playing a little parlor game of my own. When a challenging question is raised in conversation, I no longer hit my Google shortcut. Instead, I continue the discussion and try to tease out the answer by speculation, educated guesswork, and probability. You know, the ways we did a decade ago. I no longer hit my contacts button on the phone to dial a number for me; I am working on memorizing my list, at least for the numbers I use most frequently. Instead of treadmills that take me nowhere, I use my local park to go for a run. I smell the air and watch the seasons change.

Although this may all seem a little sanctimonious in our hustle-bustle, always-on, technologically stuffed lives, I’m working on exercising my mind as well as my mouse-clicking texting fingers. I now even switch off the auto reverse in all my rental cars. Parking garage walls the world over: You’re welcome.