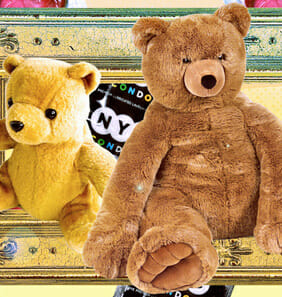 By Martin Lindstrom: Marketing consultant and author of Brandwashed – September 10, 2012

You may not be able to buy love, but perhaps you can buy a related feeling: security

If you’ve followed my work over the last couple of years, you’ll know how I consider spending time in consumers’ homes an essential part of my work. As increasingly more of our time is taken up with emails, sitting in board meetings, and finding ways to navigate the global financial crisis, we’ve forgotten those who are really paying our salaries–the consumer. Research reports and focus groups are good at defining demographics, but fail to reveal those small personal insights that can transform a brand. This is why I’ve spent thousands of hours in consumers’ homes trying to understand what makes consumers tick (and what doesn’t). This has resulted in many fantastic insights–including finding out what teddy bears, picture frames, and condoms have in common. (More on that soon.)

The industry term for this type of investigative work borrows from anthropology–it’s called an “ethnographic study.” In theory, it does not require that much. All that’s needed is a pen, a notebook, and a family willing to invite you into their home where for a few hours they briefly share their lives. You’d be amazed just how much you can learn by observing people–enough even to change the entire philosophy of a company. And that’s my mission. I drag my clients into their consumers’ homes to let them discover firsthand who the people that pay their salaries really are.

Sometime I take CEOs who run multibillion-dollar companies and board members along on these visits. Their job is to observe. We sit around kitchens in North Carolina and Mississippi. There we defer to boys whose fingers fly across controls of Game Boys and PlayStations, or young girls who groove to Adele. Little do these families know that every move they make or question they answer could redefine the future for millions of people.

I remember once I took a client into a family home where they failed to refrigerate the very popular beverage he presided over. They nonchalantly explained that they’d run out of fridge space. Yet in all the company’s communications they’d emphasized that their drink is one that must be consumed cold. However, in this family home other household items were in place. Milk was in the side of the fridge door, eggs were in the egg tray, and fruit and vegetables were in the drawers. There were other beverages being kept cold, but not this CEO’s company’s drink.

This may not seem too big a deal, but when a beverage manufacturer is earning millions from a drink that’s best served chilled, it’s important to know why the Vitamin Water has taken priority, and his company’s drink has been relegated to the pantry floor.

It took two years to work through the obstacles. The key issue involved parents’ resistance to their children’s consumption of a drink that they didn’t think had any nutritious value (which it indeed had). With research and a lot of hard work, parents accepted the drink and eventually felt comfortable with it in the fridge, alongside the juice and milk.

During ethnographic visits it is my habit to take in everything in the home. I notice what’s hanging on the walls, I peruse the books on the shelves, the DVDs lying around the living room, the magazines in the bathroom, and, if I’m to be totally honest, I’ll even rifle through closed drawers. After years of going into people’s homes, I began noticing a steady increase in, well, teddy bears, picture frames, and condoms. I date this change back to 2009. Besides being kept in bathroom and bedside-table drawers, I now began seeing condoms displayed in glass vases like candy. Then there are the teddy bears. For over a century they have been a feature in young children’s bedrooms. However, it seems that these days teddy bears are growing older with the children they initially comforted. It’s quite likely you’ll still find them on the pillow of an average teenage girl’s bedroom, and even beyond.

What could explain this? The answer came to me as I began spending time with some of the more sophisticated retailers whose window displays are using pictures in frames. They’ve also been hanging framed images along the entrances to their store–and not just a few images but as many as 40 or 50. It’s a psychological reality. The less secure we feel in a financially unstable universe, the greater our need to “frame our lives.” As Keisha M. Cutright, an assistant professor of marketing at Wharton points out in a Journal of Consumer Research paper, picture frames help us feel secure.

Among other revelations, the study indicates that the more we’re under pressure–from a sluggish economy, a rough job market, you name it–the more we feel the need for a secure environment to live in. This need for stability also offers a plausible explanation for why people are adding framed images to the walls of their homes. It also explains the longer-living teddy bears and the increase in condoms. Teddy bears provide comfort and a direct link back to the “good old days,” a time of rosy memories when we imagine everything was wholesome and good. And condoms? Psychologist Belisa Vranich offers a similar explanation: It’s all about feeling safe in a world that seems to be increasingly unstable. Here, safety means something different than it does when talking about teddy bears, but the mental security is just as real. Perhaps this is why condom sales have soared 16% over the past four years.

As you might imagine, I dread the day when I walk into a home and see a framed picture of a teddy bear holding a condom. I wouldn’t know where to begin my analysis of what that might mean.