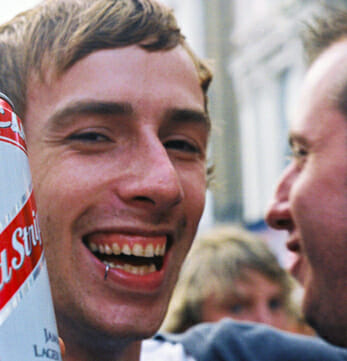 Fast Company: Why You (Yes, You!) Are The Future Of Branding

By Martin Lindstrom: Marketing consultant and author of Brandwashed – May 16, 2012

New research shows just how much we love to talk about ourselves. Twitter and Facebook have built massive platforms on this premise. How long before many other brands grab a piece of our action?

You run through the latest collection of your party photos, psyched to share the best ones with a few good friends. You email them and post them on Instagram and Facebook. Then you realize what everyone will really be looking at in the pics. Hint: It’s not you, it’s them. The first thing they’re scanning for is to make sure they look good. They then look at the people surrounding themselves in the image. In this case they’re not nearly as interested in how good-looking the people are, they’re more concerned about how popular they themselves appear, and that they’re being seen with the “right people.”

Over the past year, I’ve used eye-tracking technology to study exactly how obsessed we are with ourselves. What I’ve found is that, more than ever, we’re hardwired to be this way–regardless of culture, age, or gender. This goes a ways toward explaining the latest craze sweeping Japan. It’s not a new gadget, or more exotic sushi. No, it’s something as traditional as a postage stamp. As part of a recent incentive to encourage the Japanese to send letters, Japan Post issued a series of stamps with an entirely new format. These stamps were not emblazoned with royal profiles, historical personas, striking flowers, or rare birds; rather, they offered the opportunity for the consumer to place their own face on the letter.

How did we get here?

One need look no further than Twitter, Facebook, and LinkedIn to get a sense of how willing people are to reveal all–to say nothing of the countless throngs of bloggers still clogging your RSS feeds. But surely this goes beyong mere narcissism, which every one agrees is a powerful force. Harvard neuroscientist Diana Tamir, along with her colleague Jason Mitchell, set out to study why we are essentially motivated toward self-disclosure and, well, bragging.

The researchers recently set up a series of laboratory tests to find out what value people placed on various opportunities for self-disclosure. Using fMRI, they tracked the brain flows of the respondents, to see what parts of their brain were activated when they answered serious questions about their inspirations and beliefs, as well as casual questions about pizza preferences, say, or what sports they like to watch. The scientists offered money as an incentive for the subjects to answer certain questions that nothing to do with themselves. In an interview with the Wall Street Journal, Tamir said, “We joked that this was the penny for your thoughts study.”

And yet, despite the financial incentive, the subjects were willing to relinquish between 17-25% of their potential earnings, in order to reveal information about themselves. What Tamir and Mitchell found was that when people speak about themselves, there is heightened activity in the region of the brain belonging to the meso-limbic dopamine system. This is the area interested in reward and satisfaction, often associated with food, money, and sex.

If you are suddenly smelling a market opportunity, rest assured that you are not alone. So what might this pleasure of self-disclosure mean for the future of brands? For starters I predict we’ll begin to see unusual brand alliances. It’s likely corporate brands will offer consumers a “soapbox” from which individuals can pimp their own identity. Indeed Best Buy has of late been doing just this by featuring tech innovators as the faces of the products the chain sells–check out Instagram’s Kevin Systrom, the guys behind Words With Friends, and other creators in this clip.

The Japanese have also already grasped this notion. In fact I noticed this trend emerging a few years ago when Japan’s largest noodle manufacturer encouraged chefs from local eateries to feature their portraits on mass-market noodles produced in small quantities, and only sold in the local restaurant and the surrounding retail outlets. Pretty impressive, when you think about it. On the one hand, the noodle company is leveraging their big-muscle brand power, while at the same time they’re tapping into the brand equity of the local chef who is known and respected in the neighborhood. I suspected then that this form of individual branding was merely the beginning.

On my most recent visit to Asia, I was invited to view one of the largest plastic molding facilities in China. They wanted to showcase an amazing new technology. Using an ordinary camera, the company demonstrated how they could capture a photo and convert it into a 3-D figure, in two short minutes. But that’s not all. There were hundreds of images at the ready. I could, for example, select Homer Simpson’s impressive midriff, and put a photo of my face on top of it. For good measure, I could add a pair of Mickey Mouse’s ears. The quality was as impressive as the versatility it offered. Oh, and it could all be done for the grand sum of $2.

As technology improves and the cost of production decreases, personal branding will no longer be in the domain of an elite few. Soon every Smith, Singh, and Lee will become his or her own brand on anything and everything, everywhere. Printing centers have been offering this feature for years–we’re all well familiar with the local plumbers’ fridge magnets–but there’s a new generation of merchandising making its way to you, and it promises to make you the center of the universe. It won’t be long before brands are forced to create alliances with each and every one of their customers. You might want to clear your calendar.